UPDATE 4th June 2016: Investors attended the demo out the London Stock Exchange and received much support from staff and visitors entering and leaving the buildings. The exception was the staff of Novo Banco, who refused to meet with protestors or even accept receipt of a letter of protest. 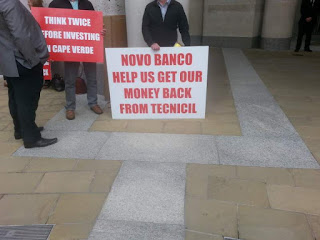 UPDATE - 23rd May 2016: Investors in the Vila Verde resort are still getting nowhere with Tecnicil and their funders Novo Banco. Tecnicil employees, such as Denyse Evora, Alfredo Cavalho and George Duarte now refuse to answer any emails and they also refuse to speak English to anyone who phones from the UK. Novo Banco refuse to address investors' concerns.

A large group of investors at http://www.capeverde-investment.com have organised a demo on 27th May 2016 and have organised an online petition for ALL Cape Verde investors. See our Latest News tab for more info. http://www.ipetitions.com/petition/we-want-our-money-back

Agua Hotels have recently tried to get this lame duck of a resort up and running and they have started renting out some apartments with mixed online reviews. So far they have refused to confirm or deny whether they are renting out properties that are in dispute by investors. They should not be!

UPDATE - 5th Feb 2014:   Two years after printing this article little has changed at Vila Verde except the pools now show on Google Earth as stagnant green. One resort management group came and went in 2014 (presumeably after realising the extent of the problem). Another resort management group, Agua, is purported to be working with Tecnicil and the bank BES to find a way to manage part of the resort and bring it to life. It appears Tecnicil have become insolvent and the bank is stuck with a huge bad loan on its books. Investors may have to wait for some time to see if anything positive materialises.

There is an active and growing investor group currently petitioning UK and EU officials and politicians in an attempt to bring the Cape Verde govt to book for their lack of interest and lack of action regarding protection of foreign investors. Contact them at http://www.capeverde-investment.com/

Vila Verde - Oh Boy!! What a beautiful 4-star resort they have built. And they have finished it. Over 1200 properties built plus many commercial units. It is a town in its own right, well landscaped too.

BUT - They scrapped their plans to build a 5-star hotel and it is a ghost town. About 400 investors are now "proud"owners but the remaining 800 who originally reserved are either in legal dispute or have walked way because they do not have the money to complete. Tecnicil - the developer - refuses to honor contracts, pay compensation or reduce the contractual price to match the 50% to 70% discounts that existing properties are now on the market for. This would help original investors get their properties and help get the resort on its feet but Tecnicil do not get that. 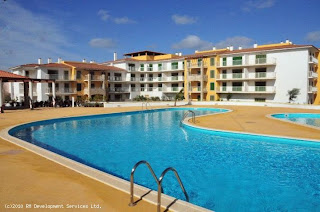 The reality is that Tecnicil has the best of Cape Verde contacts (its a local company) but for three years they have tried and failed to get tour operators on board. Tecnicil owe the owners 3 years' worth of backdated rental fees that were under contract. International operators just want all-inclusive deals or a structure that doesn't involve the complication of renting out apartments and villas. And some people claim Cape Verde is the new and upcoming destination for foreign tourists. (Mind you - some people have been saying that since the 1970's). Recently, major travel operator Thomsons canceled weekly flights to Sal and Boa Vista. They are not the first to do this. Sal and Boa Vista are the only viable island destinations and if Vila Verde can't make it, no one can.

It seems things are about to get messy - big time. Tecnicil owe the Banco Espirito Santo €millions and investors have finally had enough and are about to launch a large class action suit in Cape Verde courts. You can read more about this here