14th Oct 2016: After yet more promises from Sambala they have again cheated, lied and defrauded investors out of yet more money by taking fees in the promise they would maintain the resort whilst their new funding was being finalised. That money has now gone up in smoke. They introduced supposed funder, Pacific Challenge, to investors in August but Pacific Challenge (who have declined to comment) turned out not to be a funder at all but merely an agent promising to find a funder for investors (and for a hefty up front fee of 7.5% of further stage payments). However, much damning information, previously withheld by Grepne and McGlynn, has been uncovered and published here

Investor group SIIG have now terminated all discussions with Sambala and their supposed agent and (we hope) will pass all information to the relevant authorities. This latest development was unfortunately predictable. No director has put their name to any piece of paper issued by Sambala for years. Grepne and McGlynn have done nothing but lie and cheat for 10 years and they have become extremely adept at it. Meanwhile they continue to live a life of carefree luxury on the Med on millions of Euros from investors that should have been spent building investors' properties.

If you know the exact whereabouts of Jonathan Grepne, Dominic McGlynn or (now also) Marcus Bamberg, please email me or SIIG. Someday they will brought to book for their actions even if their extreme arrogance lets them believe otherwise. Yet another example of the Cape Verde govt letting crooks operate freely in their country. 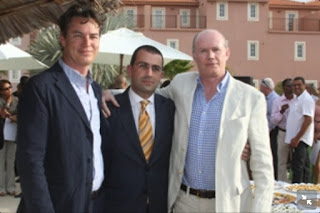 15th June 2016: Please to announce this blog as just passed the 25,000 page views mark. Particularly pleasing that nearly 2000 readers have read the Advice page on this blog. That should have prevented a lot of potential investors from making the worst mistake of their lives.

14th June 2016: The latest from a Sambala investor is that the potential Far East buyer (whose name has not been disclosed...hmmm!) has offered to honour investor contracts but on condition those investors waive a lot of their contractual rights. Sounds like Sambala history repeating itself. Time will tell, but it seems most investors are supporting the new buyer (even though they don't know who they are). They will be heroes if they do salvage the project, complete the resort and boot out Grepne and McGlynn in the process. Without those two jackasses some confidence and support might finally return to the project. A big IF!

4th June 2016: Latest from Sambala is - after many more months with Jonathan Grepne and Dominic Mcglynn (pictured) they have resurfaced and told investors that Grepne has sold the land surrounding the resort to some Far East buyers and that he is walking away with the money. He also warned investors that if they do not support the new buyers then they will not take over finishing the failed resort. He wants investors to waiver all rights to sueing him and McGlynn for all past misconduct and failings.

So Jonathan Grepne has the gall to walk away with yet more money, leaving investors even more high and dry, instead of pumping that back into finishing the development - something he is morally and legally obliged to do. Instead he chooses to fund his family's ongoing luxurious lifestyle in the South of France. The man has no morals or conscience.

But - hang on. I am reliably informed that the core assets of the resort are still frozen by the courts pending mass legal action by some investors. So how can Grepne sell those assets on? There is too much smoke and too many mirrors, as usual with this lot.


23rd May 2016: Investors in the Vila Verde resort are still getting nowhere with Tecnicil and their funders Novo Banco. Tecnicil employees, such as Denyse Evora, Alfredo Cavalho and George Duarte now refuse to answer any emails and they also refuse to speak English to anyone who phones from the UK. Funny that, since they were very fluent in English when they took investors' money. Avoid investing this company that is being propped up by Novo Banco and Agua Hotels who are now trying to rent out certain properties. There is a demo planned outside the London Stock Exchange where Novo Banco have their offices on Friday 27th May 2016. There is also an online petition for anyone who wants to support investors who have been badly let down by Cape Verde developers and a useless Cape Verde govt...

See also our Vila Verde page for more details and:

8th May 2015: I have just received a raft of documents that show large blocks of Sambala land, apartments and townhouses transferred on the Land Registry to legal claimants under a global injunction. I will seek permission to post extracts on this blog. I have also recently heard from a separate source (and one who has provided reliable intel in the past) that the UK authorities have launched an official criminal investigation into Sambala and their directors' activities. I have no verification of this presently but will publish further info as soon as I have it. Sambala directors are apparently unavailable and their current whereabouts unknown. I have attempted to contact them without success.

10th March 2015: We have become aware of the fact that Cape Verde solicitors Amado & Medina have recently taken up residence in a commerical unit of Vila Verde. This is rather odd and looks like a serious conflict of interest considering that Amado & Medina act for a number of investors who are sueing Vila Verde for breach of contract (you can read the whole sorry saga of Vila Verde on this blog). I would suggest that anyone thinking of using them for services which involve Vila Verde should look elsewhere for a lawyer.

9th March 2015: As of today I have still not received any reply from A Place In The Sun to my very polite letter asking why they do not warn potential investors of the serious risks investing in off-plan properties in Cape Verde. I assume they do not intend to address these issues for commercial reasons.

5th Feb 2015:  We have updated our Advice page, Sambala page and Vila Verde pages. At the request of several investors we have emailed aplaceinthesun.com for comment on their main Cape Verde page which does not seem to highlight the history of all the problems previous buyers have faced. I will publish their response here. The associated TV programme featured Sambala and Vila Verde resorts in 2007/2008. Of course, these are two of the biggest failed developments in Cape Verde.